According to dictionary.com, a breach is “the act or a result of breaking; break or rupture.” And that does pretty well describe the essence of this game. In “Breach” by “Tdot Games” you do not only dodge the obstacles by swiping from left to right, no, you can hold your finger on the screen, take up speed and smash through all these god damned blocks standing in your way.

Sounds like a lot of demolition fun, I’m excited!

Life on the Fast Lane

With its minimalistic cube-style appearance, “Breach!” looks plain, technical, on the edge of being too unfinished, but then surprises you with nice particle effects and an impeccable performance.

And although you can not smash every block standing in your way (which would be too easy and boring, I admit), it feels so good and relieving to breach the obstacles, which is simply not possible in almost every other comparable game I know.

I also like the haptic feedback implemented in the app giving you that extra Rumble Pak shock feeling that perfectly complements the gameplay.

Given all that, “Breach” is on its best way to become an amazing mobile game, but at the moment, there are a few things missing that I desperately need or expect.

First of all, I could almost hear the futuristic tunes, retro-fied to an amazing 8-bit soundtrack, but the game remains completely silent. No sounds, no music. That has to change immediately!

Another thing I would wish for is a time mode for the levels. Tdot already implemented the deceleration of your block after hitting another one. By introducing a time mode, the players would also have to find the perfect balance between taking up speed and smashing through the blocks, adding a nice flavor to the game.

Plus, with a level overview you could replay the levlels to max your score and make more use of the Google Play highscore integreation. 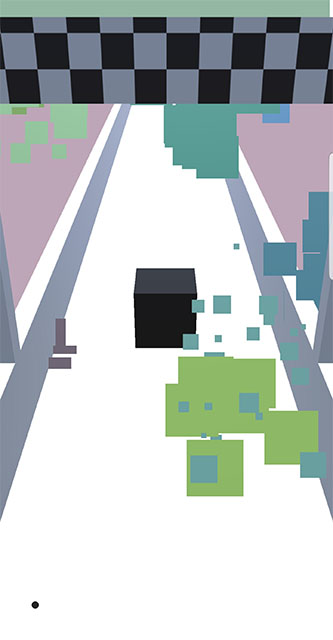 What we love about “Breach!”
What we’d like to see in the next update

No matter if there’s still room for improvement, Breach! is already a great mobile game and you should definitely download it here and keep your heads up for future versions.