Alright, guys. I’m getting old. Why? Because today I realized that I am reviewing mobile games for such a long period of time, that I actually see a mobile/casual gaming trend coming back.

With “BallDog!” by “Gammes”, I see the revival of the classic game genre of “Launching Games”, that was absolutely en vogue about 10 years ago, with games like “Homerun In Berzerk Land”, “Catapult Madness” or “Shopping Cart Hero”. So, yeah, there must be something about the idea of launching objects into the air that we all love. And we all enjoyed it putting angry birds into a slingshot and yell “FIRE!” into our smartphones, right?

Now, we’re about to load our slingshot with dogs instead of birds, but the general idea stays the same: In “BallDog!”, it’s your mission to reach the farthest distance possible by tapping and boosting your flying dog. And “Gammes” did a great job with creating a cute and coherent setting (with great details! Just look at the bowl standing “Good Boy” on it!”) and creating a fair, yet challenging mix of boosters you need for an extra kick and obstacles you’ve got to avoid.

Plus, I really liked the tutorial, as it’s both helpful and funny and also had a nice, personal touch. And I almost never praise tutorials, if you look at my previous reviews! 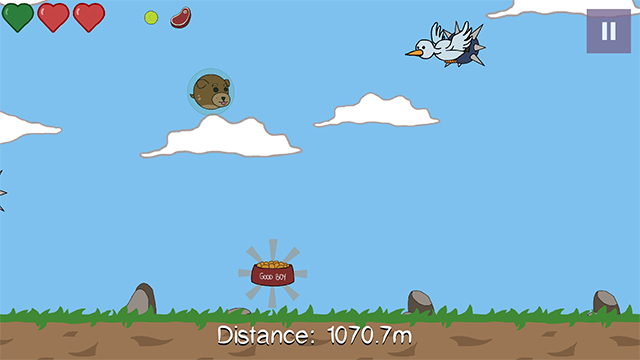 I’m invincible! … At least for now…

How far can we go?

There’s hardly anything to criticize about “BallDog!”, since the developers have even thought of a competitive leaderboard and unlockable extras. So, the only wish left may be the wish for more. Alternative levels, more unlockable skins, maybe another game mode to spice things up.

One note though: I’m not sure if it’s just me, but I couldn’t launch the game without being logged in to Google Play Games. If so, that would be quite new for me and maybe quite frustrating for those, who want to keep their digital data level at a minimum.

What we love about “BallDog!”
What we’d like to see in the next update