Do you like to be handy and build your own towers? Try your luck playing “Stack Fall” by “One Unit”. It’s a fun game, in which you try to stack up as many falling boxes as possible. So do you think we can build it? Yes, we can! 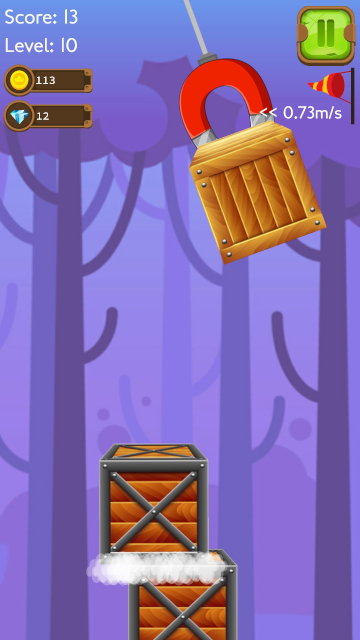 Details adding up to a challenge

Creating a tower with boxes sounds simple, but there are some details, which pose a fun challenge. First of all, the boxes aren’t simply falling down. They are held by a magnet, which swings around and it’s your task to perfectly time the fall so that the packages land on each other and the whole stack doesn’t fall over. Secondly, there are different materials, which make the cubes heavier or lighter and more likely to tip over accordingly. The wind is another influence on a perfect landing, as it needs to be calculated before you tap to disconnect the magnet from the package. All those factors create a fun challenge.

I also like that there are various background music styles to chose from to match your taste and mood. There are also different options to keep playing after a box fell down. You can either pay some coins, diamonds (which you only earn for perfect landings) or watch an ad to get a second chance.

I wish I could have a final look at the stacked up packages after losing. Just to see how well you did. You always just see the last two cubes on the screen while playing, so I’m quite curious about the tower itself.

I would also enjoy moving faster. I had the feeling that if I dropped the next package right after the one before, they could stabilize each other. But even if that isn’t possible, I would prefer not to be forced to wait for a full swing before I can disconnect the magnet again.

Another suggestion of changing the game a little bit would be the display of the wind direction. I didn’t notice the change of direction in the beginning at all. Because I mistook the icon for the direction, which simply is the symbol for the occurring wind. The details about its direction and strength are below and less noticeable in my opinion. Maybe there could be a little enhancement for an easier overview during the gameplay. 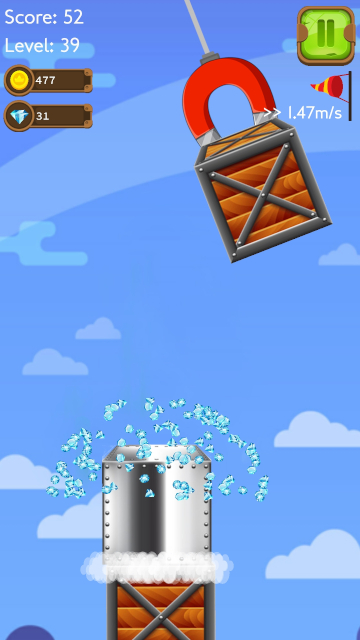 “Stack Fall” is a fun game with surprising details. If you feel drawn to it, download the game here and start dropping boxes from the sky.