Today we visit the Puppy Valley. Where once joyous puppies were playing, angry mobs spread through the lands. The happy puppy Pappy possesses the last known happiness in the world and we need to help our little fur friend to defend it against the impending danger. Let’s find out more! 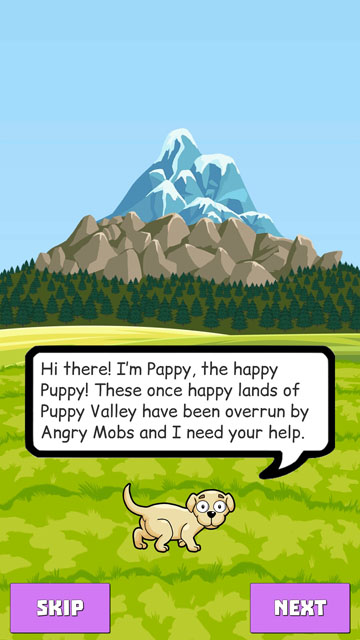 Pappy, the happy puppy in peril.

When I read that I needed to help an animal in danger, I immediately was aboard. I mean, who wouldn’t help this cute creatures and doesn’t love dogs? And as soon as I started playing I knew I would have fun along the way. You help your pup climbing shape puzzles and collecting useful items to avoid any danger. It is a fun game play that I’ve never seen in this form before. Before you get started you’ll find a helpful tutorial on hand that explains everything you need to know and additionally there is a small encyclopedia in which you’ll find a lot of useful information. It definitely made me as a player feel cared for.

The whole game feels well thought out and contains a lot of creativity: the idea itself, the various kinds of dogs and its traits, the ammo and the different mobs (- even parts of the Play Store description). It’s fun and creative. While I usually don’t enjoy lavatorial humor, in this case it totally make sense to utilize the characteristics of a dog.

Since it is a thought-out game, I think a more polished look regarding the style choices would make it appear even more well-rounded. Personally, I think the different fonts used in the game makes it appear a bit restless and less professional, especially the black font that appears to be Comic Sans?

But the main issue I have with this game is the touch sensitivity. When I am trying to choose a new puzzle shape I sometimes have to press it three, four or five times until it gets selected. Not only slows it down the game, it also make it more difficult to react to the mob and eliminate it. It also makes it harder to finish the game through the uppermost row. Lastly, I’d love to have a minor addition: I would like to be able to see the objective again later. Sometimes I just think about the ideal way for too long and forget about it or just didn’t read at all it in the beginning. So I’d love to see again what I have to do to finish the level. 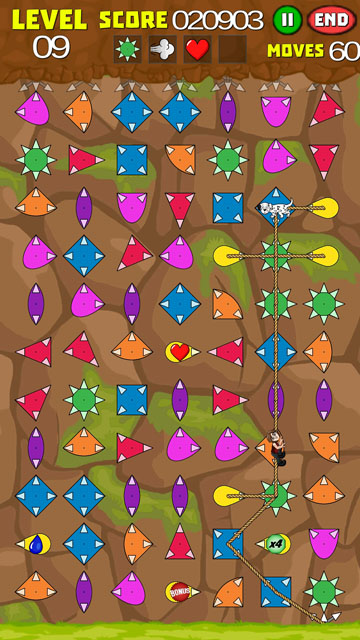 Find your way through the maze.

I am sure you are eager to go and try this game for yourself now! Go, download it here and show these puppies some love!