Nothing beats a good beat ’em up. Since 1997, when I came in contact with games like “Killer Instinct” and “Turtles Tournament Fighters“, I’m always up for a fine hand-to-hand combat. Unfortunately, the genre is a bit dusty and still lives off big names like “Tekken”, “Mortal Kombat” or “Street Fighter”. Even Wikipedia says, that the golden age of brawlers is long gone. Will “Gladiator Bastards” by Frak Ltd. breath new life into the fallen warriors?

This game contains graphic violence and is not suitable for persons under the age of 18. If you are under 18 years of age, please refrain from reading this review and ensure that you will stick with games appropiate for your age.
✕ 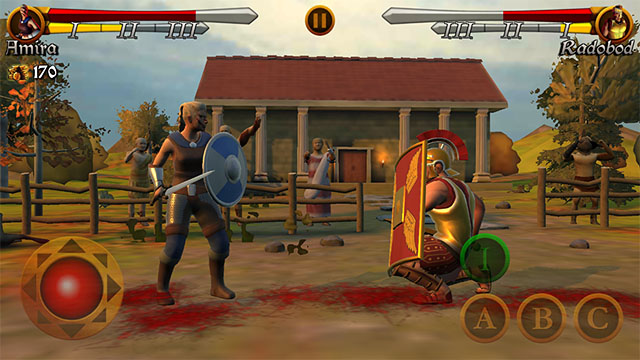 A Roman in Germania? Looks like this poor legionary never heard of the Battle of the Teutoburg Forest.

Well, there is a certain reason why we had to display that alert above before we can finally talk about the bloody details of the game. Guys, “Gladiator Bastards” is nothing for kids or greenhorns. The ancient battles with swords and sabers turn the battlefield into a g(l)ory mess, especially with the three unlockable special moves, every gladiator can perform as soon as his rage-o-meter is about to burst.

“Gladiator Bastards” is a good, dirty piece of mature entertainment and doesn’t fail to find the perfect balance between realism and action. It’s perfectly paced – neither too slow to become boring nor too fast to look foolish.

Plus, I really like the ancient setting as it’s different from the majority of beat ’em up games, making it slightly more distinguishable, unique and much more interesting to play.

When it comes to the downs of the game, I can only say that I just miss a few things that I wish to appear in a future version of the game.

First of all: In case you’ve ever wondered why there are always pretty girls in a beat ’em up game – it’s because of me. It’s because I always choose to play them. For me there’s no Tekken without Christie Monteiro or Street Fighter without Chun-Li. No girls, no fun, simple as that. Given that, I honestly had no motivation to unlock the remaining characters, as you start off with two butch amazons – and that’s all the girl power you’ll get. But even if the lack of female fighters doesn’t bother you, you will care about all characters being more or less the same brutal bastard type, which is indeed inherently consistent, but not very rich in variety.

Besides that, I’d only wish for a bit more love for the background graphics. Whereas the character design is mostly flawless, the background textures often appear to be muddy and very low in detail. I haven’t bought that S8 for nothing, guys! Challenge my phone! 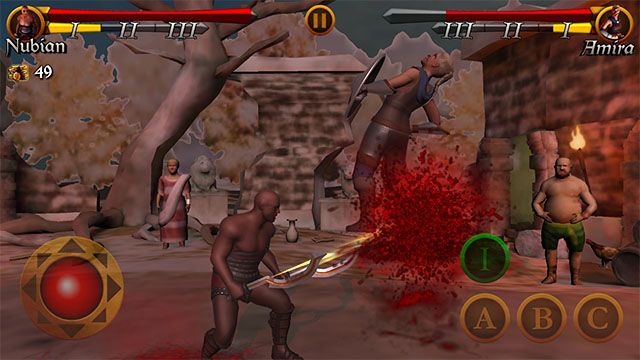 So that’s how you pull the rug out from under somebody’s feet. 😉

“Gladiator Bastards” kicks asses! And thanks to the ancient setting, it also brings some new blood to the genre. So, if you’re old and tough enough to play this – go ahead and download the game here.