Count Logica is the next game by Smokey Moose Games, a deveopment studio, that you might remember from my Flagsplosion review. It’s both available for Steam and Android, the version that I’ve installed to review it for you.

It’s not a great mental effort to build a bridge between a game called Count Logica, where you have to count hidden zombies, ghosts and vampires and the famous “Count von Count”, the vampire-like Muppet on Sesame Street. But this is not my only association while playing this game: Actually, the game itself is some kind of mixture between Minesweeper and Sudoku, which hopefully sounds as unique and creative at it is.

Acutally, I don’t know another game of this kind and the cute and coherent Halloween theme fits perfectly to the gameplay.

Speaking of things that fit – the myserious, Don’t-Starve-Together-esque music is gorgeous and very well chosen. 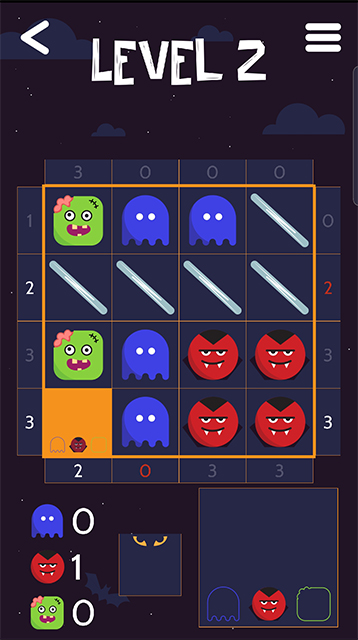 I’ve read the whole tutorial, played the first level and didn’t understand anything. Then I re-read a few passages, played another level, thought I’ve got the knack of it, but then I failed it without getting the reason. Then I tried another level, found out, that the game indicates mistakes with an error sound and started groping in the dark with a trial-and-error-method.

I guess that’s not how you play this game.

My suggestion: By improving the tutorial, maybe with the implementation of explanatory video material and a few entry levels with a smaller grid (2×2 or 3×3), the developers could make the first steps into this game so much easier, especially for old, raddled players like me. 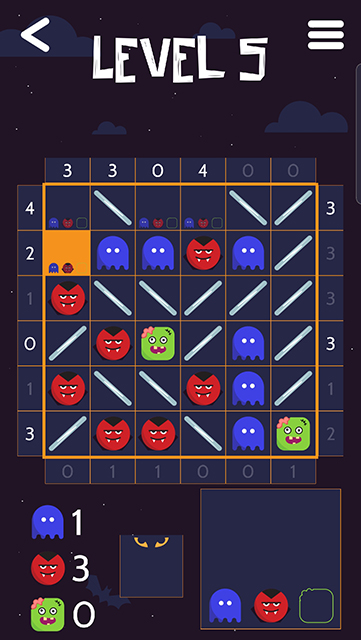 What we love about “Count Logica!”
What we’d like to see in the next update

If you wear a pair of smarty pants, you shouldn’t hesitate and download Count Logica right away. If you’re slow on the uptake like me, you should download it in spite of that to stimulate your brain cells.