Anyone in for a puzzle game? No, I’m neither talking about jigsaw puzzles nor about any of these so-called brain games, that could be all renamed into boredom.apk. Things are getting both interesting and hardcore now, I promise! 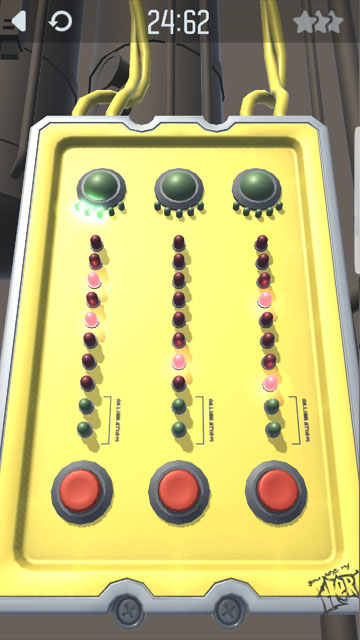 According to Merriam Webster, a black box is a “complicated electronic device whose internal mechanism is usually hidden from or mysterious to the user” and no other words could have said it better. In “Turn it on!”, you’ll see dozens of these black boxes without having the faintest idea what they’re for and you have to try all buttons, switches, wheels, knobs, handles, and cogs to make them work somehow. The biggest strength (and USP) of this game is the sheer unbelievable versatility and creativity the developers put into these crazy machines. Seriously, after you’ve switched on some devices with an obvious mode of operation, the functionality and design of the machines get more and more elaborate and, yeah, gaga, with each and every level.

In later stages, the black boxes become truly colorful, figuratively spoken, which goes hand in hand with the well-designed graphics and harmonious sound effects. But it also leads to a serious gameplay issue.

As the black boxes get truly complicated, you can almost feel the frustration of all casual gamers, who just like to solve some riddles now and then. I guess, at least beginning from the 10th level, only core gamers will still try to understand how the black boxes work in order to turn them on using specific patterns. The average user will try the trial-and-error-method a few times and give up on it shortly after.

Anyway, if “Turn it on!” is designed to be a puzzle game for curious minds, nerds, tinkerer and puzzle maniacs, it perfectly fills out that niche. But the developers could at least think of a) implementing an easy mode, b) developing a second game mode or c) offering a free version for beginners. 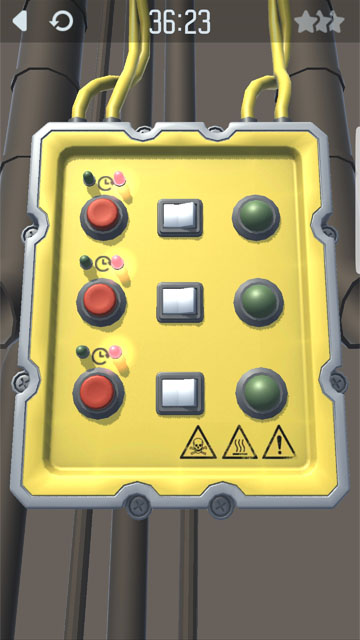 What am I supposed to do here?

What we love about “Turn it On!”
What we’d like to see in the next update

If you get easily demotivated or frustrated, you should only download this game, if you promise me not to ruin its fabulous 5-star-rating. And if you’re a passionate puzzler, you won’t find a better way to spend 3€ than with the purchase of”Turn it on!”. Period.