“Popcorn” by “Julius Aurel Hack” set its goal to fight your boredom. As the name says you are playing with popcorn. It’s falling down on your screen and you have to click on it to pop the corn and collect points. But avoid the black grains. As the developer says, you don’t want to eat them anyways. Let’s see what it’s all about! 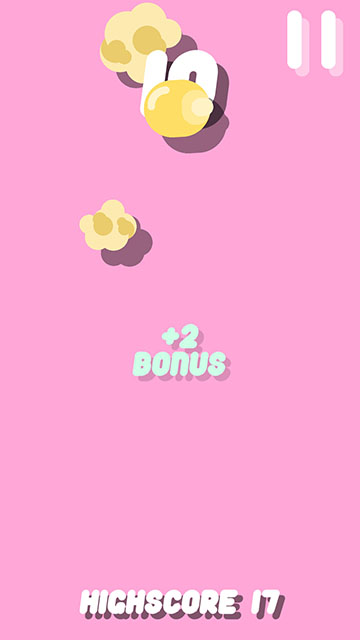 “Popcorn” convinces me with its nice background colors. Since the whole game design is kept simple the background has a huge influence on the whole look and I like it. You can also choose your own style from a range of pastel colors. (Maybe there could be some blue and green shades in the future as well.)

The comic style corns, which are popping if you tap on them, really make me feel like making my own popcorn. I like the detail of the red and white striped cup, which appears when you lose. Adding the sound effect of the popping really makes a very satisfying game design.

The gameplay is fairly easy. Your only tasks are clicking on the yellow pieces and avoiding the black ones. It’s simple, yet addicting. Overall I think “Julius Aurel Hack” reached the goal of fighting the boredom.

Adding some more ingredients to the recipe

Since the game isn’t officially released yet, I would like to add some details, which would increase the fun even more. The gameplay is pretty simple, so I think including some catchy and matching background music could spice it up and draw you in even more.

Even though the gameplay is manageable, I always prefer to get some kind of explanation before I die unnecessarily because I didn’t know the rules. Maybe little reminders to avoid the black pieces etc. could be also shown when you start playing for the first time.

Furthermore, I would like to have an exit button as for now the only way to leave the game is to close all opened apps on my phone. 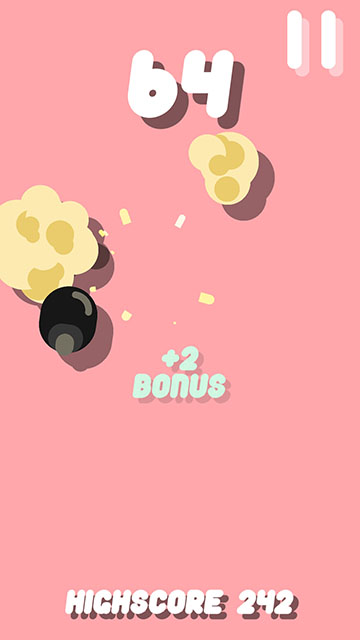 “Popcorn” is a cute and very fun game to play anywhere you wish. If you want to pop some corn kernels as well, check it out here.