What will happen when a soldier finds his home under attack of a foreign army? Ayush Raj calls his new game demo “Niara” a visual novel role play game. As the character Niara, you will experience the struggles of defending your country with the help of magic and fighting. This clicker game offers a map to explore and confronts you with various battles and dialogues. 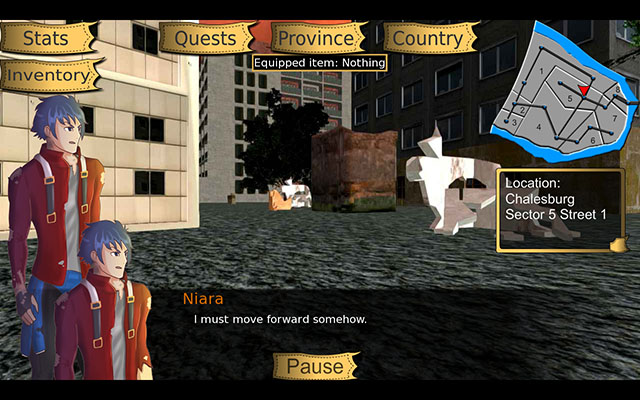 The characters are resembling a comic or manga style, whereas the surroundings look more like 3D animations, which give it a more realistic look as well as an eerie feeling matching the graphic content of people having died under attack. (This game is recommended for players of legal age.) The music also supports this atmosphere as it is a subtle sad instrumental during the dialogues. However, it changes into a more upbeat track during the battles, successfully adding suspense to the fight in my opinion.

Speaking of the fights, I really like the randomization of successful attacks and dodging. This keeps the battle scenes more interesting, especially in the beginning, in which the enemies always go down after one strike.

I wished there was an explanation for the attacks though. It wasn’t very clear to me what “Magic” would do in contrast to the other choice “Attack”. An explanation of what the “Health Potion” and “Mana Potion” would do exactly (as in how many health and magic points would be restored) would be a helpful addition as well.

Furthermore, some more details on the map would improve the sense of orientation. As for now, I wasn’t exactly sure where I would be going, as the options I had to choose from were not exactly visible on the map. Instead it only shows the sectors but not the streets.

Since I really like the original characters design, I was a bit confused with the motorbike scene. For my taste, the graphics changed a little bit too much into a funny cartoon style, which doesn’t really fit with the overall style of the game. 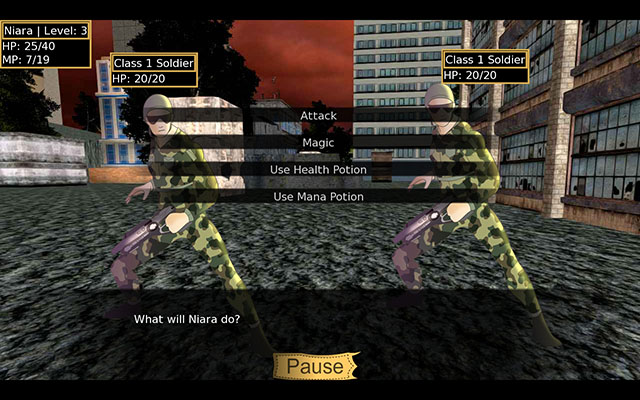 Will you choose to attack or use magic?

“Niara” is a visual novel role play game with an engaging story to explore. If you want to help Niara save his country, download the game here.