In some cultures shattering glass brings good luck, in others, it brings bad luck. Hopefully, the arcade game “Glass Breaker” by “Vavylon Games”, in which you have to smash bricks, will bring you good fortune. You have to challenge yourself aiming and throwing balls to break out before the bricks reach the end of your screen. Keep reading if you want to learn more about “Glass Breaker”. 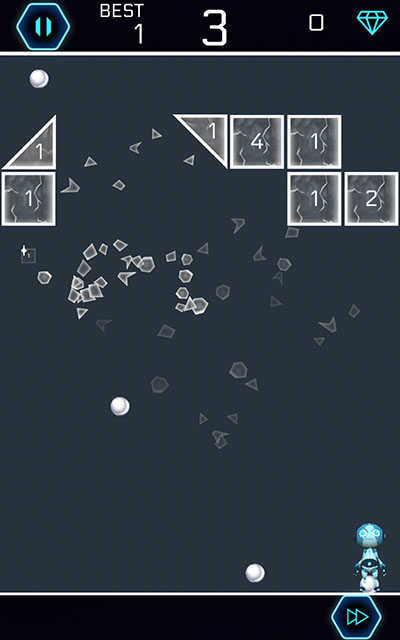 “Glass Breaker” is a very addictive game with easy controls. You just need to use one finger to aim and shoot. A little robot will help you to throw all collected balls. I think it looks cute and overall, I like the game design. It looks neat and clean. I also enjoy the addition of the speed button, which will help you to fast forward in case the balls got stuck or you just want a quicker gameplay.

You can play this game offline as well, which is a great plus in my opinion. It is accessible truly wherever or whenever you feel like shooting some bubbles and smashing some glass. And I promise you, you will feel the urge to play this game again and again. Its level design is just the right mix of challenge and success. So you will want to beat your record or your friends’ records.

If you ran out of space, you can buy a second chance with diamonds or by watching an ad. I really favor this kind of ad implementation. However, it doesn’t work sometimes as it just doesn’t show you an ad and keeps counting down your loss.

I also wish there was another way to create a checkpoint as by having an all clear. I think having come to a certain level or having destroyed a number of bricks could also be worth of a checkpoint. In addition, it would be great if this checkpoint would last longer than for the next round.

I enjoyed the sound effects. But I would prefer if there was a background music as well. I think that would pull you even more into the game as it already does. 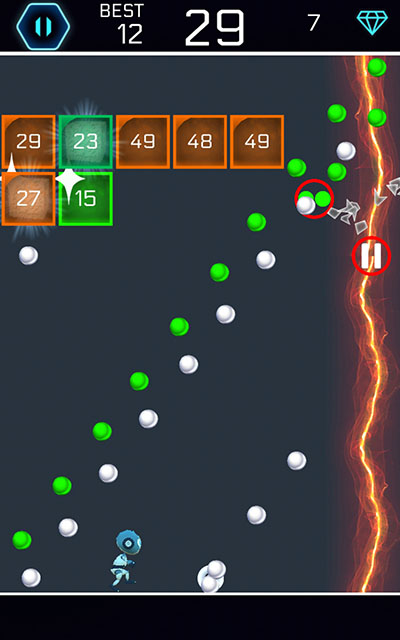 If you enjoy bubble shooter and break out games, “Glass breaker” will make you forget all other tasks than helping the robot destroying all bricks. Download “Glass Breaker” here.