“The Commission: Organized Crime Grand Strategy” by “302 Interactive” is a strategy game for Steam, in which you “stake your claim on the city of New Shore” by getting involved “with the rackets and politics that defined the Prohibition era.” Alright, then. Let’s take a look at this Al Capone simulation game. 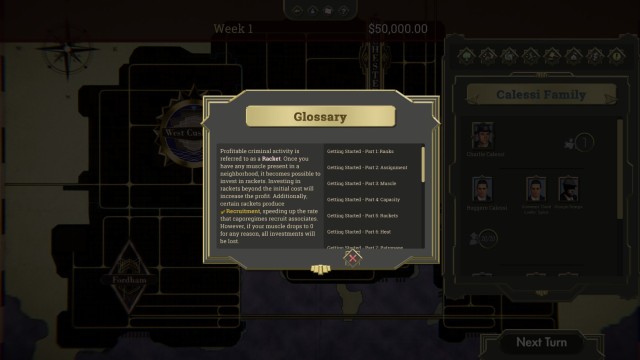 Close your eyes and imagine a North-American city in the 30’s of the last century. Think of the people and their wardrobe, the architectural style of the modern era and the classy tunes you’d expect from bars that don’t want the Roaring Twenties to end. Now open your eyes again. Have you imagined trenchcoats and fedoras, art deco elements all over the place and some jazz or swing tunes that makes you want to snap your fingers? Yep, that’s it. And that’s exactly what “The Commission” sounds, looks and feels like. And it’s absolutely gorgeous.

This game is so confidently stylish, that it’s almost the perfect allegory of the 1930’s. 302 Interactive did a great job with satisfying all expectations without being corny or cheesy at any point. They’ve caught the whole spirit of that era, boiled it down to the essentials and poured it into this game.

However, despite the visual and acoustic elegance, the gameplay itself is as sober as the rough reality of the prohibition era. If you’ve expected a bit of action while you try to become the most powerful famiglia in the hood, I have to disappoint you. There is literally nothing else for you to do than clicking through numerous lists, statistics and drop down menus, making you believe that being a Don is as entertaining as a 10 hours shift of a tax accountant in an insurance company.

Plus, you feel lost like an intern on the first day. There is no tutorial, no info pop-ups or any kind of event messages that guide you through the game like you’re used to it from other strategy games like Civilization, the Patrician or Rise of Venice. The only – somehow – helpful content is the 18-part glossary. Halleluja! Imagine, you’ve got Tin Lizzie in your garage, but you have to read the full operations manual before you can take a ride. Sounds like fun, eh?

Also, the readability of many texts written in Italic (ironic!) is pretty low. Another font (size) would help a lot to improve it. And I guess it’s not unimportant in a game that is mostly text-based. 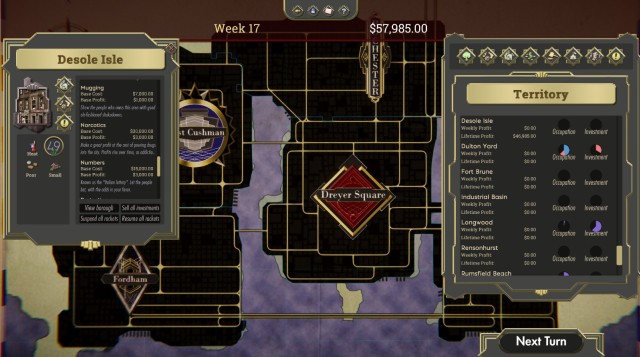 “The Commission” is a perfectly designed Mafia-themed strategy game. With an impeccable wrapping like this, the developers only have to juice up the inside of the game as well until its official release on August, the 23rd. Ciao Bella! 🙂

Edit 16.08.2018: A few days ago, 302 Interactive updated the game and it now has the game notifications requested in this review. Great improvement, superb!
✕