You know, it has been only a few days since someone showed me the game “Monument Valley” and made me want to try it. But since then it has been sitting in my Play Store wish-list. When “Sole Light” caught my eyes, I knew, I would like it, since it looked similar. So, I downloaded it and started playing immediately. Let’s find out if it could live up to the expectations! 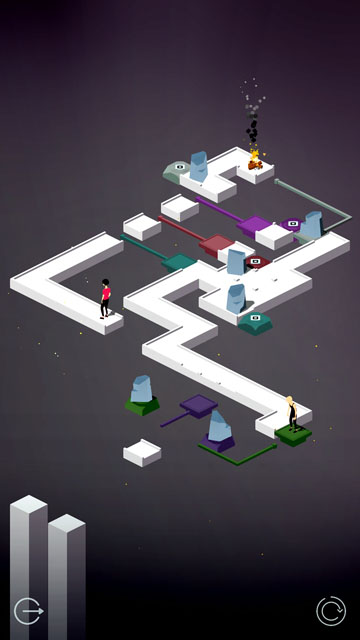 Warm yourself at the bonfire.

The game is an isometric puzzle game, in which you try to get the bonfire to reach the next level. But be careful as the caves in after you’ve stepped on it. To help you reach save fields, you’ve got obliging imitators on your side. It is a lot of fun try to get to the next tier and definitely needs some brainpower. The developer even encourages you to “look for a hidden deeper meaning”.

The game idea is supported by amazingly smooth animations well done graphics either way. They might be simple, but are done with a high quality taht gives this game a professional touch.

The soundscape is another factor that makes this game, that is only released a a beta version so far, a great one already. I would describe the music best as eery. It draws you into the dystopian surroundings this game is set in.

Lastly, I like the introduction of the ‘helplings’. They give the game play an interesting component and fit into the sinister (and for some reason matrix-esque) atmosphere.

As the Play Store already warns you: Since this app is in development, it is rather unstable so far. I had a very stable playing phase, but on the other hand another, in which the game crashed regularly. So for the next update, I’d love to see an improved, stable performance.

Collaterally, I noticed that the buttons on the bottom of the screen work flaky. When I tried to use them, they hardly reacted to the touch. So either sensitivity or the stability needs to be improved.

Lastly, I would (not quite selflessly) suggest to add more levels before releasing the game officially. So far it doesn’t take long to play through the existing ones. While the difficulty gradually gets higher already, I would love to have a few more that are hard(er) to go through. I can’t wait to see what the next challenges have to offer! 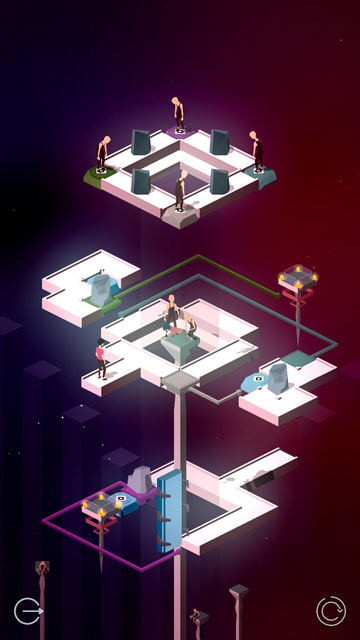 “Sole Light” has the potential to be a new star in the Indie sky. If you are curious to try this game already, download it here! I know for sure, that I’ll keep this game on my phone to see it grow.